Today I have had the best experience ever on Wetwheels South East and how wonderful that Mum and Dad shared it with me.  We headed to Dover seafront, parked and then walked to the Sea Sports Centre reception.  We were greeted and made very welcome.  Mum filled in some paperwork and then we were set to go.  Chris Dunnigan and Neil Scutts were our 'chaperones' for the trip.  Chris put my life jacket on me (I was a bit unsure of this and pushed it away, but mum persuaded me it was ok).  Mum and Dad put theirs on too.  We had a little walk to the marina where we boarded.  WOW, little old me is on a boat.

I sat down and we were soon on our way.  Hey this feels great.

We went faster and this was the bees knees.  We went into the harbour and wow such great views, the castle, the cliffs and the huge ferries (not seen them from this angle before).

Well you just won’t believe what happened next.  Chris asked if I would like to steer.  Can you believe it?  Little old me was asked if I wanted to steer.  Yes, me (this doesn’t usually happen).  Mum and Dad helped me to move safely.  I sat on the stool and touched the steering wheel.  Mum helped me to turn the wheel.  Get me, eh.  I can steer a boat!  I also liked to push the buttons on the wheel (hope they were not ejector buttons!).

We went out of the harbour wall and along towards The Bay.  I could see the water splashing and I looooooved it.

WOW, my dad had a turn to steer the boat (hey Dad, take it easy).  Out of the harbour there was a bit more motion but nothing to worry about.  I just kept chuckling and rubbing my eyes with excitement.

It was soon time to head back but we had to let Calais Seaways Ferry pass before we could enter the harbour.  Boy it was huge.

We have been so lucky to join Ryan on this trip and even luckier to witness first hand Ryan’s enjoyment.  It was priceless.  Unsure of how he would react meant I was a little nervous.  There was absolutely no need to have been.  He was so cooperative and I really felt he was listening.  The icing on the cake was Ryan being offered to steer the boat.  Again priceless and a great illustration of inclusion.  We clearly had as good a time as Ryan; seeing his handsome face light up and see him laughing as he did makes my heart melt.  Once again thank you to all involved for giving Ryan such a quality experience which in turn has a positive impact on his wellbeing and quality of life. Xx

We have had the best afternoon with Wetwheels South East again!  We feel so privileged to have had another trip, this time fishing!!!  Experiences like this are priceless and are so meaningful for all of us... more treasured memories to add to the scrap book!

Almost everyone had a catch, with the littlest one having the first and putting the adults to shame.  Ryan didn’t manage a catch, but he thoroughly enjoyed the whole experience and braved holding a fish!  We went to the beach after for ice creams and paddles in the water to cool off.

Thank you so much again to James and Nic for having us all; we cannot express enough how much enjoyment we had!  There certainly was ‘miles of smiles’ today!  What you guys do is fantastic and we are ever so grateful for opportunities like today!

Some of you may recall I have had several trips out on the Wetwheels South East boat.  Well, today I attended its naming ceremony which was hosted by Geoff Holt MBE DL.  A little piece of background info about Geoff, who is the driving force behind the Wetwheels project.  Geoff was paralysed in a swimming accident in 1984 and uses a wheelchair.  Geoff became the first disabled person to sail single-handed around Great Britain in 2007 and in 2009 sailed around the Atlantic Ocean un-assisted.  He was awarded his MBE for his services to disabled sailing in 2010.  He was made a Deputy Lieutenant of Hampshire in 2012.  Wow, just Wow, eh!

We arrived a little early and led to the lift to go up to Hythe Bay restaurant where the ceremony took place.

Everyone welcomed us and I loved the music.  A man was playing the accordion.  He moved closer to me as he could see I liked this.  There was another young gentleman standing 'to attention' wearing the Olympic 2012 outfit and holding an Olympic torch (not lit, of course).  WOW.

We 'mingled' with the other guests, and went outside on the balcony where we could see Wetwheels in the sea.  Mum spoke to several people discussing my experience of my trips and how this is such an asset to our local community.  I think I’ve heard her say it a thousand times, hee hee.

We were all asked to move inside while speeches were given.  Well, I wasn't too cooperative on this score, but that was OK, as Michelle pushed me up and down the balcony, stopping briefly to see what was happening inside.  Lots of talking and then applauding.

Dover's new mayor gave a little speech and thanked Wetwheels on behalf of our local community.  When the cutting of the ribbon by Thomas and unveiling of the plaque by Geoff Holt was over, we left.  Mum didn’t want to me to get so unsettled that I got stressed.  As we were leaving I noticed a young man in a wheelchair (from Martha Trust).  I reached forward and touched his hand, and his head, I was very gentle.  Mum said this was priceless.  Mum didn’t get a picture of this as she was too busy asking permission from the carer in which time I had removed my hand.  That doesn’t matter though as it was a priceless moment captured with the eyes.  We said our goodbyes and left.

Firstly, well done Ryan for being such a star and attending this ceremony; probably a first again.

Today I felt very honoured to be a part of this naming ceremony.  Listening to the speeches highlighted the passion and enthusiasm amongst those who make this happen.  I felt myself nodding in agreement with pretty much all that was being said and then when I think about Ryan and others being able to access this great opportunity it bought happy tears to my eyes.  It just goes to show there are no boundaries to what disabled people, whether they are young or old can achieve when there are teams such as the Wetwheels team going 'all out' to make that difference in their lives.  We are so lucky to have this right on our doorstep.  It’s amazing that 604 people have accessed this in 2 and a half months that equals miles and miles of smiles which is what it is all about.  Well done Wetwheels and please do carry on making more smiles. 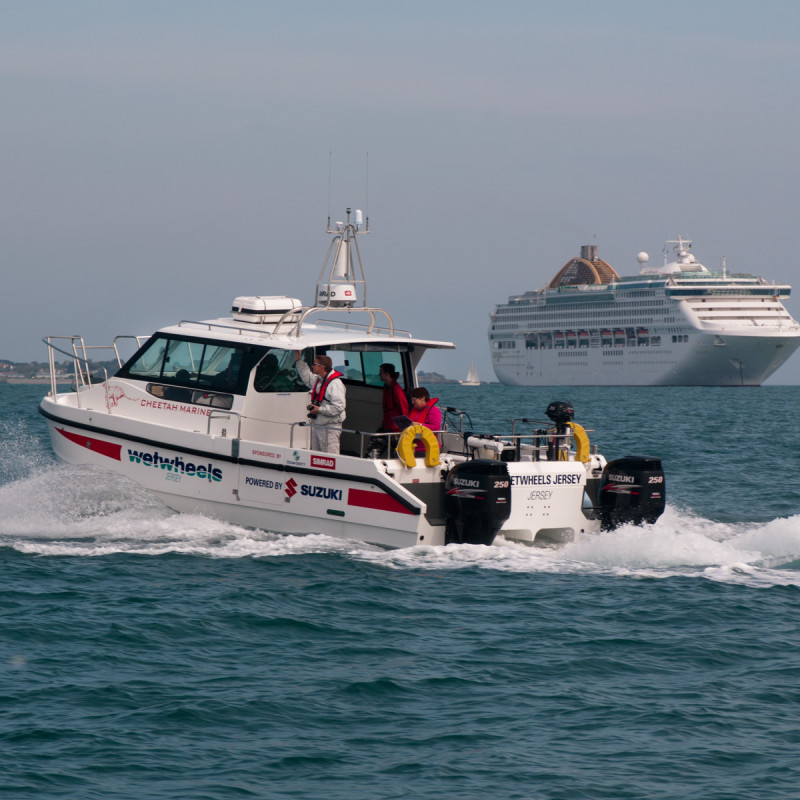